Lima was created in 1535 during the Spanish conquest, intended to serve as the capital of part of the colonial empire, it concentrated resources and talents. Its historic centre is a UNESCO World Heritage Site, and its visit must be combined with neighbourhoods such as Miraflores, which reflect the city’s modern and contemporary vibe.

As is usual in the Spanish Empire, Plaza de Armas is located in the centre of the historic city. All around it were established the main authorities of the country, with the Presidency of the Republic and the Archbishopric’s Palace, the Cathedral and the Town Hall of the city. The flower beds allow plenty of space for walkers, observed by all those sitting on the benches. 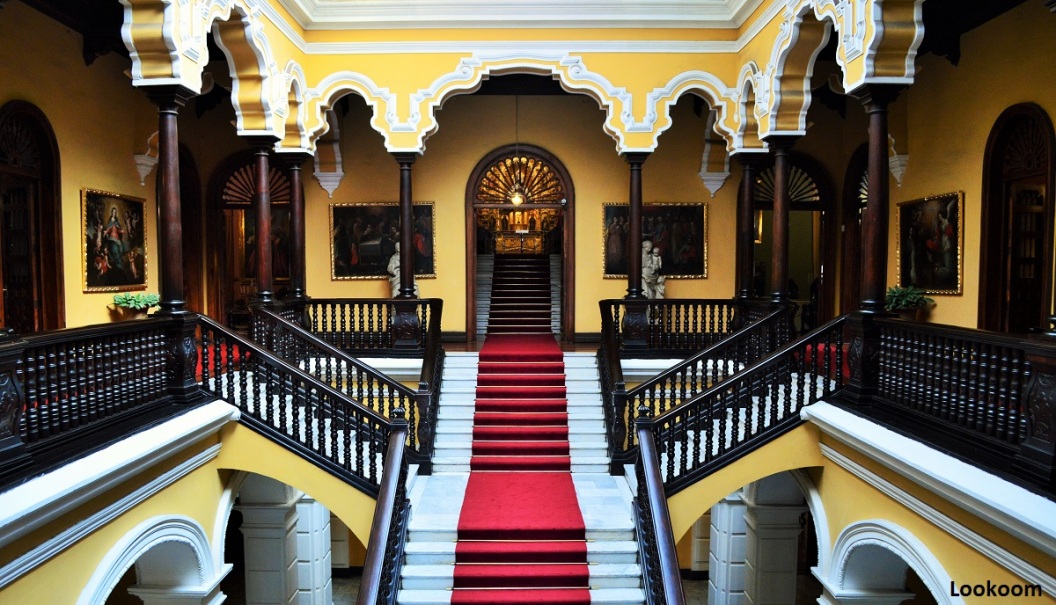 Even if the current palace only dates back to 1924, it does convey the magnificence that the Catholic Church surrounded itself with. The two floors, which serve as reception rooms, are open to visitors and are stylishly furnished and embellished with paintings and sculptures. The palace has one of the most beautiful examples of carved wooden balconies, typical of Lima.

The construction of the cathedral began as soon as the city was created in 1535, it was a long and laborious process disrupted by several earthquakes. In a chapel is the skeleton of the conquistador Francisco Pizarro, founder of Lima. The museum presents many religious works such as nativity scenes or song books.

The monastery complex dates back to the 17th century and remains in operation. The library and especially the catacombs are used to attract visitors. During the guided tour, photos are not allowed, apparently out of respect for the monks, who are not seen, and certainly not in the basements of galleries and pits where some bones are placed.

The palace is a fine example of the blending of styles commissioned by aristocrats who wanted to show their wealth. At the beginning of the 18th century, the first owner was the treasurer of the Spanish fleet, with substantial resources at his disposal. Today the palace depends on the Ministry of Foreign Affairs, it is usually possible to visit the courtyard.

It is a ceremonial site of the pre-Inca Wari civilization, built with clay bricks assembled vertically to form terraces that rise into a truncated pyramid. There have been many human sacrifices, mainly of women. Several discoveries of burials and mummies provide information on funeral practices at the time.

While the historic centre impresses with its monuments, the modern city has settled in Miraflores, on the Pacific coast. Many expatriates live in this district secured by auxiliary police officers, most of the tourist hotels are also found there, contributing to a multicultural atmosphere exemplified by the Larcomar shopping centre suspended on the cliff (more).

Kennedy Park is the centre of gravity of Miraflores. Between the well-kept flower beds, musicians and painters perform in public, cultural activities are taking place there, and the surrounding bars and restaurants offer a wide range of choices. Feral cats live in freedom, fed and cared for by charities, for the pleasure of the walkers who enjoy it.

Among the parks and gardens that occupy the Malecon on the cliff overlooking the Pacific, Parque del Amor has a particular attraction. The imposing elevated sculpture of the feverish Kiss stands out by its size and captures the eye’s attention, then the gaze starts to run on the undulating walls, covered with warm coloured mosaics, punctuated with words of love.

As a continuation of Miraflores, Barranco will appear a little less ordered and policed. It is mainly visited for its Bridge of Sighs, spanning the Bajada de los Baños leading to the shoreline, between two rows of café terraces. It must be crossed without breathing to make a wish. On the way, the colours of the mural paintings may appeal to the eye.